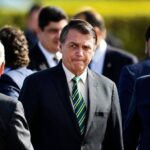 The letter is Bolsonaro’s most amicable overture yet to Biden, a Democrat. The Brazilian president was a close ally of former Republican President Donald Trump and refused for weeks to accept the result of the Nov 3 US election, repeating baseless allegations of fraud. It took him 42 days to recognize Biden’s victory.

The post Brazil’s Bolsonaro says he wants free trade agreement with US in letter to Biden appeared first on Profit by Pakistan Today.